My Volkswagen is made in june 2010, meaning 5 years old. I’ve never owned such new car before. You do leave it to a workshop or garage for maintenance. Or…? Which workshop would I entrust? (read more).

Although in most cases most of workshops behave well and perform a decent job, there are numerous  reports and stories about the opposite too, and no smoke without fire . And when it comes to the individual level, it becomes binary. Either is fine or not.

I do not want to be the one standing there being the one who was deceived. Disgrace. Fight for you rights. Or leave with car non-maintained and with relieved wallet. I wish not to even have to worry about that so could be the case. 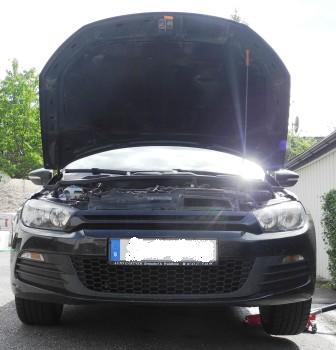 So, I ended up in German and American forums, reading, and I watched youtube clips. And I read the manual for my VW Scirocco TDI, with 2.0 liters 16-valve common-rail engine. 60.000 km (approx. 37.500 miles) maintenance. What should be done, and how?

Not much, it appeared. Most lots of check-outs and exchange of oil and various filters.

Here I have compiled how I did it, what tools were useful, what it costed me and how long it took.

Maybe it also can help you, my TDI brother, likely it is identical or similar to the Golf, Polo, Passat, Touran, Audi A3, TT, Skoda Octavia, Seat Leon, etc. There are even some Jeep and Fiat models fitted with VW TDI engines!

Every second year break fluid is to be exhanged. Operation is universal and independent of brand and model, for DIY please see article here

Please note that my car has manual gearbox. If your ride is equipped with  DSG-double clutch automatic gearbox you should also exchange its oil and oil filter.

This was how I did it. 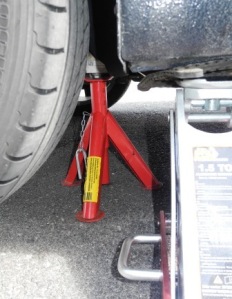 1. You need to get under your VW. For your own safety, don’t trust jack, use jack stands.

1. Jack your Volkswagen up and support it on a jack stand.

2. Open the hood and remove cover above engine. It’s only fastend with four snaps. Feel with your fingers and pop cover loose, snap by snap.

2. Right rear ”snap”, seen from beneath of the cover, which is turned backwards just before loosened.

Let’s begin with air filter. Removal is easy and success gives you great confidence, but also since old filter is good for putting oily parts onto. 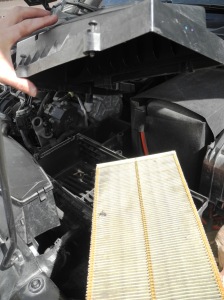 3b. Lift air filter box cover up and back to remove air filter.

3c. New Air Filter in place. Note ”Made in Germany” – quality mark worth paying for, according to me.

Make sure your VW is jacked up with enough space beneath for you to slide in under. Under power train, there is another cover to remove. 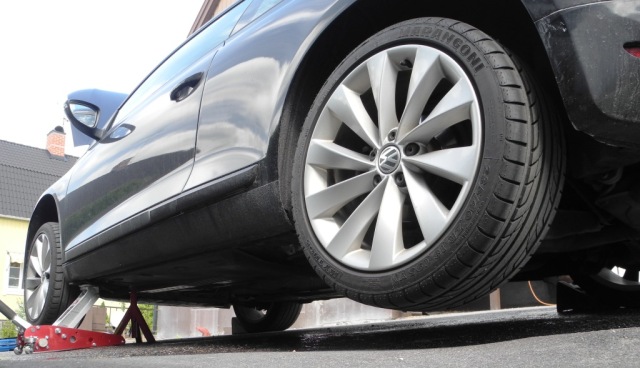 Stiffness of the Scirocco

4. Oil filter removal (before open engine oil drain!). Oil filter is an insertion filter and is removed from above engine compartment. By removing oil filter, you open a valve, which makes it possible to drain all old oil from engine.

4a. Oil filer is located just in front of engine, in the middle of it, a bit hidden by cables, tubes and hoses, which all can be gently moved aside (See pict 4). Use 32 mm pipe to open oil filter housing. Use a univeral joint with extention.

4. Tubes and cables out of the way and you can access oil filter (ojefilter)

4. 32 mm pipe with universal joint and extention and ratchet

4b. Use a cloth and hold beneath, since oil filter follows the lid upwards and i quite heavily attached to lid. And is very oily. Hand force liberates lid from old oil filter and new oil filter is attached to lid. Please take note to O-sealing in the thread i lid. Exchange it too. Tip: put old, greasy oil filter on to oil air filter to avoid soiling. 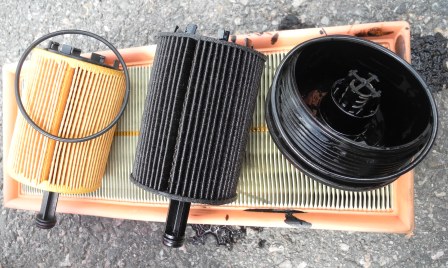 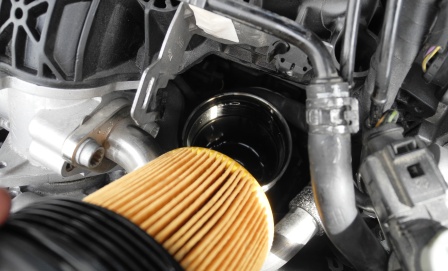 4d. Plug and tubes, which was moved, are put back in place.

4d. Tubes, hoses and plug which was moved aside are put back into correct positions.

5. Let’s go under your Volkswagen and remove 8 skrews, 4 on each side, together with 3 in trailing edge of the lower engine cover (also see picture 8 below).
Torx T20 for the 8 smaller and T30 for the 3 bigger. I used power tool here.  Engine cover folds its trailing edge and then you just pull it backwards and it loosens easy from front attachments (picture 5).

6. Oil drain plug is located in trailing edge of engine. You can’t miss it. 19 mm standard hexadent opens it.

6. Oil drain plug is located on sumps back side

6a. Put a bin which can contain 4 liters of oil under engine.

6c. Check copper gasket on oil drain plug. Normally it is good enough for reuse at least once.

6d. When oil is drained, rescrew oil drain plug together with its copper gasket.

7. Check Gear box oil level. Please note that your Volkswagen has to be horisonal now, in order to controll gear box oil. A manual gear box, as my car is equipped with, should not need gear box oil exchange, but the DSG demands change of oil and filter!

7a. Drain plug to gear box oil is located on front side of gear box and is opened with allen key (which is called insex world wide), see picture. 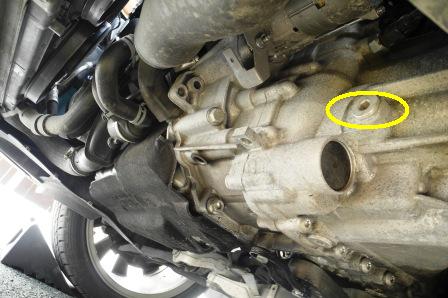 7. Drain plug for gear box i located in front of gear box housing.

7b. When your VW is horisontal, a few drops of gear box oil bleed of from the hole. This is good. If car is raised in front, nothing comes out even if level is good and if car is parked in downhill, even a normal level will flood gear box oil out. Make sure car is horisonal.

7c. Normally gear box oil is not consumed. Drain plug hole is also inlet, if oil level is too low and top up is needed. Use correct specification of gear box oil.

7. Gear box drain plug is opened and with a normal oil level, it should drop slowly frpm hole when car i horisontally located.

9a. Lower engine cover is refitted

9b. Remove jack stand and lower your Volkswagen, in order to easier access engine compartment, where rest of work is performed.

11. Fuel filter. TDI engines are produced with either of two kinds of solutions, one featuring aeration and one without. Pray to your gods your VW has the one without aeration; then you don’t need to ventilate it and suck water from it. It is easily recognised, screw in middle of cap means aeration, no screw, less job. 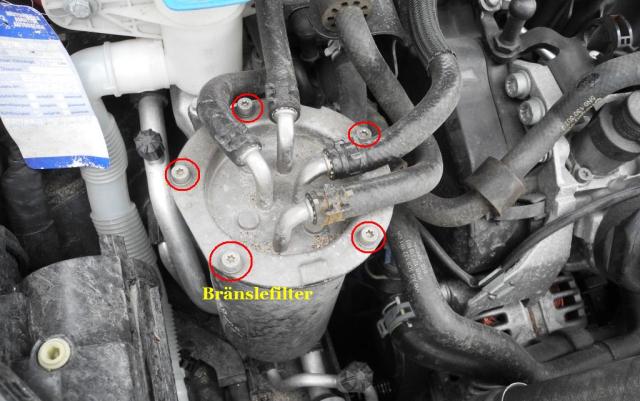 11. Diesel filter house with cap on. This one is without aeration. It is open by 5 screws, Torx T20. Open and tighten by operate every second screw until all is done.

11a. Lossen the five screws on cap, loosen every two screw until all is loose. The remove all screws.

11b. Lever the cap. Located in its front, there is a small hole, make for a big screw driver.

11c. Have a cloth prepared. Remove cap by lift it upwards. The fuel filter releases itseldf from cap and sinks to bottom. Notice the level of diesel fuel with filter in – you need to restore the level before assembling.

11d. Fish up filter (mind that diesel fuel is aggressive to you skin) and allow to drain a bit. Keep a cloth beneath and put old fuel filter onto old air filter. 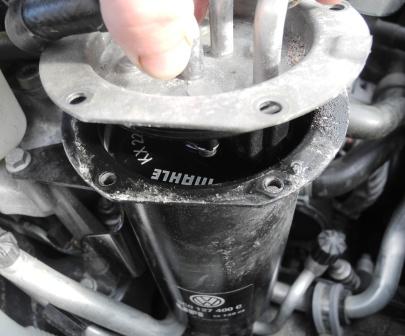 11b. Lift cap upwards and tilt it slightly forward. 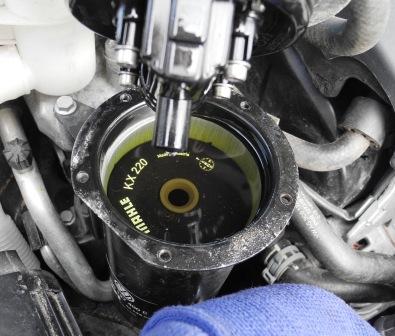 11c. Filter has losen from its tap in cap and sinks to bottom of filter house.

11d. Filter is removed and this is heavy contaminated (color) – the new filter is white! Use a cloth so no diesel fuel is spilled. 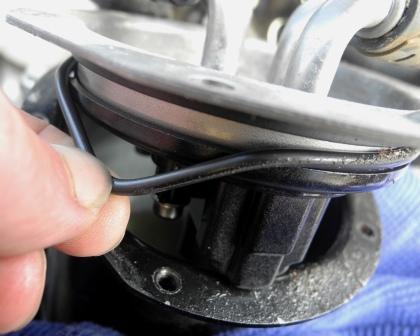 11e. Pay attention to gasket on cap. I cannot possible be misspositioned.

11e. Remove old gasket and fit new. It is situated as shown i picture.

11f. Put new fuel filter in and refill with new diesel until level is same as before (since some amount of diesel is lost with old filter) If you ignore this step, you might end up with air in fuel system resulting i a violently starting difficulties. I can assure you don’t want to risk that.

11g. Put cap back on, refit screws and tighten performing ”every second” method until all screws are tighten.

13b. If you own VAG.COM now connect it to your Volkswagen and read CPU error codes (if any). Correction of error normally means repair, which is why this is not included in maintenance.

14. Test drive. Oil pressuse should be instant and car should handle normal.

15. Reset service interval. It is found in car’s trip computer or in VAG.COM.

16. Note mileage and what has been made to car in service history.

Done! Now you know for sure that everything important has been done to your Volkswagen. Doesn’t it feels safe?!

It costed med approximately $200 in oil and parts and took about one hour. But then I used camera and took pictures in order to present this to you.

Calculate two hours if you never done this before, but it is of course depending on your mechanical skills. But I would not say it is hard to do. Why don’t you challange me! How fast can you perform this VW maintenance? Post your time in commentary below.

Now when oil has been exchanged, you might find interest in secrets and mysteries of oil  här

Why use alu-rims? Only for the look or… . läs mer här

other car experiences are shared här